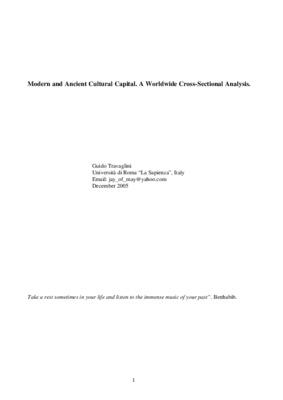 By Guido Travaglini
Get PDF (0 MB)

In this paper I attempt at answering to the following question: is modern culture affected by amcient cultural heritage? Are Archimedes and Qin Shi Huang, Cicero and Shakespeare, and the like, still intellectually alive? Do the Parthenon and the Temple of Heaven, and the like, significantly affect modern architects, artists, engineers and novelists? And if so, to what extent? To this end, by drawing from the genetics and memetics literature on cultural transmission and evolution, I empirically test for the existence of links between modern and ancient cultural capital stocks for a sample of over one hundred countries. By using some relevant international datasets, I proxy the former kind of stock with several education and printed-paper indicators and the latter with some distinctive features drawn from the UNESCO List of the World Heritage Cultural Properties. I run for each of the modern-culture indicators a cross-section regression to establish the magnitude and significance of these links, along with the effects of current demographic, social and economic variables. Due to the implied small- sample size, as well as to measurement error and endogeneity, coefficient bias associated to ‘weak instrumenting’ and to ‘excess instrumenting’ represents a serious issue, which is appropriately tackled by comparing some recently proposed econometric estimation methods. These are: Empirical Likelihood (EL), two-step Generalized Method of Moments (GMM) and Bias-Corrected GMM (BGMM). The results obtained are in general similar, although the first outsmarts the other two by optimally selecting the instrument vector, and are definitely appealing, as there appears to be for most of the indicators and for the entire sample a timeless and significant thread connecting modern with ancient cultural capital, although in certain cases it is tied to elitarian means of learning and transmission.Education, Books and newspapers, Cross-Section, Empirical Likelihood, Generalized Method of Moments.