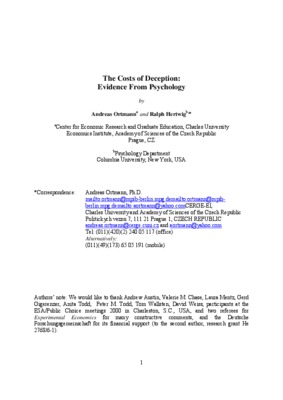 The Costs of Deception: Evidence From Psychology

By Andreas Ortmann and Ralph Hertwig
Get PDF (0 MB)

Recently, it has been argued that the evidence in social science research suggests that deceiving subjects in an experiment does not lead to a significant loss of experimental control. Based on this assessment, experimental economists were counseled to lift their de facto prohibition against deception to capture its potential benefits. To the extent that this recommendation is derived from empirical studies, we argue that it draws on a selective sample of the available evidence. Building on a systematic review of relevant research in psychology, we present two major results: First, the evidence suggests that the experience of having been deceived generates suspicion which in turn is likely to affect judgment and decision making of a non-negligible number of participants. Second, we find little evidence for reputational spillover effects that have been hypothesized by a number of authors in psychology and economics (e.g., Kelman, 1967; Davis and Holt, 1993). Based on a discussion of the methodological costs and benefits of deception, we conclude that experimental economists' prohibition of deception is a sensible convention that economists should not abandon.Experimental economics, deception, reputational spillover effects