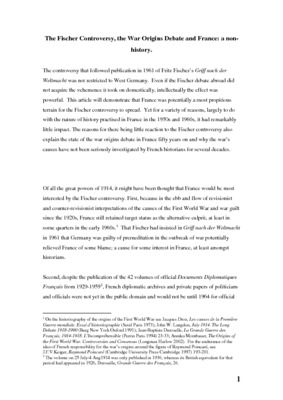 The Fischer controversy, the war origins debate and France: a non-history

The controversy that followed publication in 1961 of Fritz Fischer’s Griff nach der Weltmacht was not restricted to West Germany. Even if the Fischer debate abroad did not acquire the vehemence it took on domestically, intellectually the effect was powerful. This article will demonstrate that France was potentially a most propitious terrain for the Fischer controversy to spread. Yet for a variety of reasons, largely to do with the nature of history practised in France in the 1950s and 1960s, it had remarkably little impact. The reasons for there being little reaction to the Fischer controversy also explain the state of the war origins debate in France fifty years on and why the war’s causes have not been seriously investigated by French historians for several decades