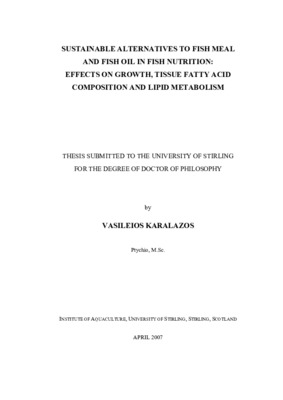 By Vasileios Karalazos
Get PDF (938 KB)

Traditionally, fish meal (FM) and fish oil (FO) have been used extensively in aquafeeds, mainly due to their excellent nutritional properties. However, various reasons dictate the use of sustainable alternatives and the reduction of the dependence on these commodities in fish feeds. Hence, the aim of the present thesis was to investigate the effects of the replacement of FM and FO with two vegetable oils (VO) and an oilseed meal on the growth performance, feed utilization, nutrient and fatty acids (FA) digestibility and tissue FA composition and metabolism in three commercially important European fish species. Specifically, in Experiment I crude palm oil (PO) was used to replace FO in diets for rainbow trout. In Experiments II and III FO was replaced with rapeseed oil (RO) in diets for Atlantic salmon at various dietary protein/lipid levels aiming also at further reductions of FM by using low protein (high lipid) diet formulations. In Experiments II and III the fish were reared at low and high water temperatures, respectively, in order to elucidate, also, the potential effects of temperature. Lastly, the effects of the replacement of FM with full fat soya meal (FFS) in Atlantic cod were investigated in Experiment IV. The results of the present thesis showed no negative effects on growth performance and feed utilization in rainbow trout when FO was replaced with PO. The dietary inclusion of RO improved the growth of Atlantic salmon, possibly, due to changes in the nutrient and FA digestibilities and FA catabolism while, the growth and feed utilization were unaffected by the dietary protein/lipid level. However, the growth of Atlantic cod was affected negatively by the replacement of FM with FFS. The proximate composition of the fish whole body was in most cases unaffected by dietary treatments. The changes in dietary formulations affected the dietary FA compositions and resulted in significant changes in the fish tissue FA compositions. It was clearly shown that the fish tissue total lipid FA composition reflects the FA composition of the diet, although specific FA were selectively utilized or retained in the tissues by the fish. These may have serious implications not only for fish metabolism and growth but also for the quality of the final product, especially in terms of possible reductions of n-3 HUFA.Vasileios Karalazos was supported by a studentship award from the Greek Scholarship Foundation (IKY), Greece