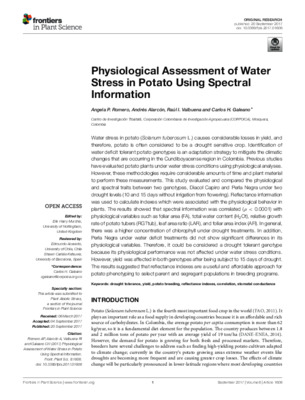 Water stress in potato (Solanum tuberosum L.) causes considerable losses in yield, and therefore, potato is often considered to be a drought sensitive crop. Identification of water deficit tolerant potato genotypes is an adaptation strategy to mitigate the climatic changes that are occurring in the Cundiboyacense region in Colombia. Previous studies have evaluated potato plants under water stress conditions using physiological analyses. However, these methodologies require considerable amounts of time and plant material to perform these measurements. This study evaluated and compared the physiological and spectral traits between two genotypes, Diacol Capiro and Perla Negra under two drought levels (10 and 15 days without irrigation from flowering). Reflectance information was used to calculate indexes which were associated with the physiological behavior in plants. The results showed that spectral information was correlated (ρ &lt; 0.0001) with physiological variables such as foliar area (FA), total water content (H2Ot), relative growth rate of potato tubers (RGTtub), leaf area ratio (LAR), and foliar area index (AFI). In general, there was a higher concentration of chlorophyll under drought treatments. In addition, Perla Negra under water deficit treatments did not show significant differences in its physiological variables. Therefore, it could be considered a drought tolerant genotype because its physiological performance was not affected under water stress conditions. However, yield was affected in both genotypes after being subject to 15 days of drought. The results suggested that reflectance indexes are a useful and affordable approach for potato phenotyping to select parent and segregant populations in breeding programs