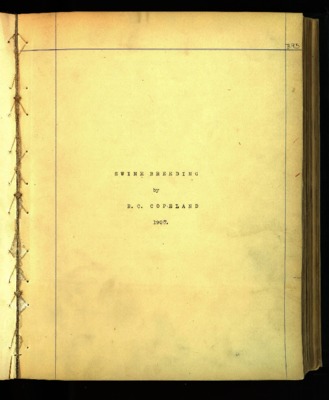 Citation: Copeland, Bernard C. Swine breeding. Senior thesis, Kansas State Agricultural College, 1907.Introduction: The early history of the hog is written only on the pages of the rocks and ancient deposits. The evolution of this animal from the prehostoric to the present form covers geological ages of time and represents the passing of perhaps several millions of years. Careful investigation shows that animals of this class existed in the Lower Miocence Period and gradually passed upward through several stages of development, in the course of geological time, becomming more and more developed toward the presentday type as the geological ages became more recent, until in the Upper Pliocene has been found remains of these animals, which were nearly identical to the Wild Boar which was found in nearly all of the habitable portions of the Old World at the dawn of civilization. At what time or by what people the hog was first domesticated cannot be definitely stated. Remains of the ancestors of our domestic hogs have been found in the Swiss Lake dwellings and in the Pile Works of the Stone Period which shows that they must have been somewhat domesticated even at a very remote period. Civilization in China preceeded that of any other nation, hence it is quite probable that they were the first to reclaim the hog from its wild state. This is again proven by the great prepotency of the blood of the hogs that are found in that country. From the earliest times, hogs have been considered to be a very important animal in Great Britan and large herds were kept there long before the Christian era. All of the domestic breeds of hogs may be divided into two groups; one resembling in all important respects and no doubt descending from the Wild Boar. To this group has been given the name Sus-scrofa. The other group is called the Sus-indicus and differs in several important respects from that of the Sus-scrofa