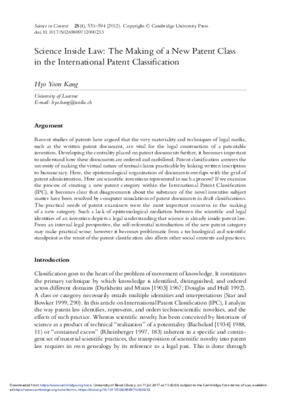 Science Inside Law: The Making of a New Patent Class in the International Patent Classification

Recent studies of patents have argued that the very materiality and techniques of legal media, such as the written patent document, are vital for the legal construction of a patentable invention. Developing the centrality placed on patent documents further, it becomes important to understand how these documents are ordered and mobilized. Patent classification answers the necessity of making the virtual nature of textual claims practicable by linking written inscription to bureaucracy. Here, the epistemological organization of documents overlaps with the grid of patent administration. How are scientific inventions represented in such a process? If we examine the process of creating a new patent category within the International Patent Classification (IPC), it becomes clear that disagreements about the substance of the novel inventive subject matter have been resolved by computer simulations of patent documents in draft classifications. The practical needs of patent examiners were the most important concerns in the making of a new category. Such a lack of epistemological mediation between the scientific and legal identities of an invention depicts a legal understanding that science is already inside patent law. From an internal legal perspective, the self-referential introduction of the new patent category may make practical sense; however it becomes problematic from a technological and scientific standpoint as the remit of the patent classification also affects other social contexts and practice