Jellyfish as an export commodity

Recently, jellyfish blooms have been reported with increased frequency from several parts of the world and it has been suggested that this phenomenon might be related to over-fishing and other human activities that are driving marine ecosystems off balance. It has contributed to the formulation of the “fishing down the food chain” hypothesis, which is based on the assumption that the reduction in large species marine predator populations is promoting the growth of organisms from lower levels of the food chain. Rising sea temperature is also considered as a reason for the occurrence of jellyfish fishery 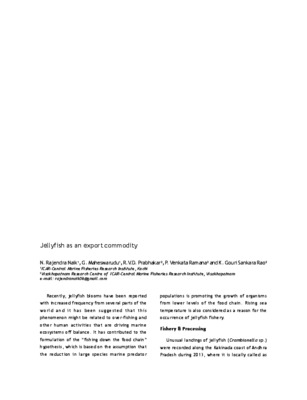