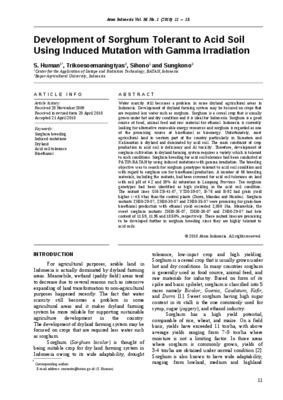 Water scarcity still becomes a problem in some dryland agricultural areas in Indonesia. Development of dryland farming system may be focused on crops that are required less water such as sorghum. Sorghum is a cereal crop that is usually grown under hot and dry condition and it is ideal for Indonesia. Sorghum is a good source of food, animal feed and raw material for ethanol. Indonesia is currently looking for alternative renewable energy resources and sorghum is regarded as one of the promising source of bioethanol as bioenergy. Unfortunately, most agricultural land in western part of the country particularly in Sumatera and Kalimantan is dryland and dominated by acid soil. The main constraint of crop production in acid soil is deficiency and Al toxicity. Therefore, development of sorghum cultivation in dryland farming system requires a variety which is tolerant to such conditions. Sorghum breeding for acid soil tolerance had been conducted at PATIR-BATAN by using induced mutations with gamma irradiation. The breeding objective was to search for sorghum genotypes tolerant to acid soil condition and with regard to sorghum use for bioethanol production. A number of 66 breeding materials, including the mutants, had been screened for acid soil tolerance on land with soil pH of 4.2 and 39% Al saturation in Lampung Province. Ten sorghum genotypes had been identified as high yielding in the acid soil condition. The mutant lines GH-ZB-41-07, YT30-39-07, B-76 and B-92 had grain yield higher (&gt;4.5 t/ha) than the control plants (Durra, Mandau and Numbu). Sorghum mutants ZH30-29-07, ZH30-30-07 and ZH30-35-07 were promising for grain-base bioethanol production with ethanol yield exceeded 2,000 l/ha. Meanwhile, the sweet sorghum mutants ZH30-35-07, ZH30-30-07 and ZH30-29-07 had brix content of 11.59, 11.95 and 10.50%, respectively. These mutant lines are promising to be developed further in sorghum breeding since they are highly tolerant to acid soils. Received: 20 November 2009; Revised: 20 April 2010; Accepted: 21 April 201