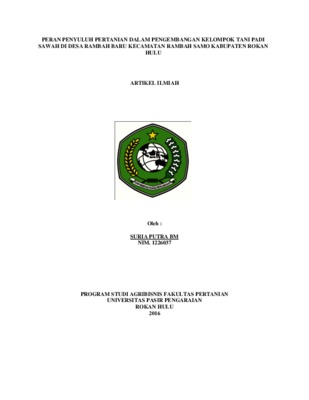 Agriculture extension officers is the extension agents are directly related to farmers whose job is to change the behavior of farmers through the non-formal education so that they are willing and able to help and organize themselves in accessing market information, technology, capital, and other resources, in an effort to improve productivity, efficiency business, revenue, and welfare, as well as raise awareness in environment conservation. This study aims to determine the role of agriculture extension officers in the development of farmer groups and obstacles encountered by agricultural extension officer agents in the field. This research was conducted in the Village of Rambah Baru Rambah Samo District of Rokan Hulu Regency. The results showed that the role of extension officers got a score of 2.36 with a high category, because the extension officers has been able to position itself as a partner and facilitator of farmers to undertake the role as a mentor, organizer and a dynamic, technicians, consultants, educators, leaders and advisors of farmers. While the development of farmer groups receive a score of 2.25 is classified means less developed. Obstacles encountered by extension officer its role is later than an input, information, and new technologies and follow up problems associated with the extension of related offices, facilities for materials practice in the field is still lacking, the low presence of farmers in various meetings, the low level of education of farmers and extension workers are still low income and difficulties in determining extension appropriate planting time related to erratic weather caused by global warming