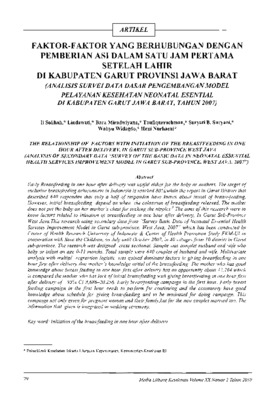 Early Breastfeeding in one hour after delivery was useful either for the baby or mothers. The target of exclusive breastfeeding achievement in Indonesia is reached 80%,while the report in Garut District that described 640 responden that only a half of responden have known about initial of breast-feeding, However, initial breastfeeding depend on when the colostrum of breastfeeding released, The mother does not put the baby on her mother\u27s chest for sucking the nipples/ The aims of this research were to know factors related to initiation of breastfeeding in one hour after delivery, In Garut Sub-Province West Java. This research using secondary data from "Survey Basic Data of Neonatal Essential Health Services Improvement Model in Garut sub-province, West Java, 2007" which has been conducted by Center of Health Research University of Indonesia &amp; Center of Health Promotion Study FKM-UI in cooperation with Save the Children, on July until October 2007, in 40 villages from 10 district in Garut sub-province. The research was designed cross sectional. Sample was complet husband and wife who baby or infant on age 0-11 months. Total sample were 640 couples of husband and wife. Multivariate analysis with multipl regression logistic, was gained dominant factors in giving breastfeeding in one hour first after delivery that mother\u27s knowledge initial of the breastfeeding. The mother who has good knowledge about breast feeding in one hour first after delivery has an opportunity about 13,264 which is compared the mother who has lack of initial breastfeeding with giving breastfeeding in one hour first after delivery of 95% CI 8,686-20,256. Early breastfeeding campaign in the first hour. Early breast feeding campaign in the first hour needs to perform for continuing and the community have good knowledge about schedule for giving breastfeeding and to be motivated for doing campaign. This campaign not only given for pregnant woman and their family,but for the new couples married too. The information that given is integrated in wedding ceremony

Topics: Indonesia, Initiation of the breastfeeding in one hour after delivery
Publisher: National Institute of Health Research and Development, Indonesian Ministry of Health
Year: 2010
OAI identifier: oai:neliti.com:153572
Provided by: Neliti
Downloaded from https://media.neliti.com/media/publications/153572-ID-faktor-faktor-yang-berhubungan-dengan-pe.pdf