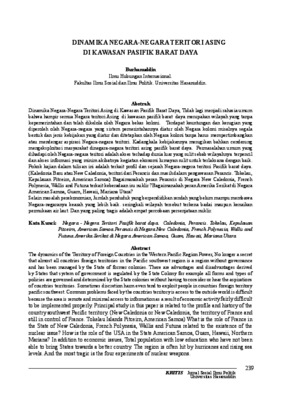 : The dynamics of the Territory of Foreign Countries in the Western Pacific Region Power, No longer a secret that almost all countries foreign territories in the Pacific southwest region is a region without governance and has been managed by the State of former colonies. There are advantages and disadvantages derived by States that system of government is regulated by the State Colony for example all forms and types of policies are governed and determined by the State colonies without having to consider or hear the aspirations of countries territories. Sometimes discretion harm even tends to exploit people in countries foreign territory pacific southwest. Common problems faced by the countries territory is access to the outside world is difficult because the area is remote and minimal access to information as a result of economic activity fairly difficult to be implemented properly. Principal study in this paper is related to the profile and history of the country southwest Pacific territory. (New Caledonia or New Caledonia, the territory of France and still in control of France. Tokelau Islands Pitcairn, American Samoa) what is the role of France in the State of New Caledonia, French Polynesia, Wallis and Futuna related to the existence of the nuclear issue? How is the role of the USA in the State American Samoa, Guam, Hawaii, and Northern Mariana? In addition to economic issues, Total population with low education who have not been able to bring States towards a better country. The region is often hit by hurricanes and rising sea levels. And the most tragic is the four experiments of nuclear weapons