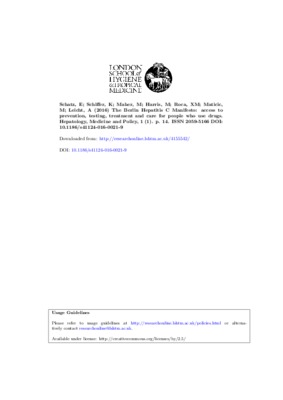 The Berlin Hepatitis C Manifesto: access to prevention, testing, treatment and care for people who use drugs.

The treatment of hepatitis C has entered a new era since the advent of curative pharmaceuticals. As policy, government and civil society assemble in response, there are still gaps to be addressed. The Manifesto on Hepatitis C and Drug Use, launched in Berlin during the Correlation Hepatitis C Initiative conference in October 2014, was formulated and endorsed by many key organizations in the hepatitis field. The Manifesto takes strides to pinpoint shortcomings in hepatitis action oriented towards the population most affected by the hepatitis C virus (HCV): active drug users. Despite a considerable amount of evidence that active drug users are disproportionately affected by HCV, barriers to care remain. Engagement with representatives of communities of people who inject drugs (PWID) is imperative in order to effectively create guidelines which reflect reality. Unfortunately, widespread systemic stigmatization and lack of trust between affected communities, decision-makers and healthcare professionals have reproduced this divide. The Berlin Manifesto has identified a disconnect between evidence and action which must be answered. In this roundtable discussion, experts from diverse parts of the hepatitis community have contributed their perspectives and experience on access to prevention, testing, and treatment for HCV in PWID. The authors discuss relevant topics such as realities of access to HCV treatment in the United Kingdom, interventions of a regional network of active drug users in Europe and lack of PWID involvement in government policy in Catalonia. Collectively they challenge the neglect of HCV in PWID by many decision-makers and health care professionals and promote a scale-up of integrated prevention and treatment strategies focusing on this population. The authors' conclusions aim to clarify the discourse on hepatitis in order to prevent disease, save lives and work towards eventual hepatitis elimination