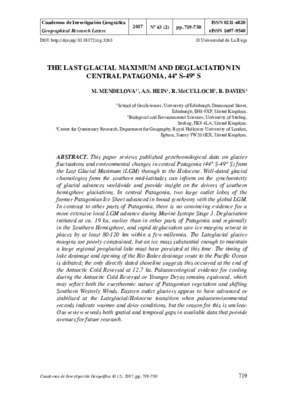 The Last Glacial Maximum and deglaciation in central Patagonia, 44°S–49°S

This paper reviews published geochronological data on glacier fluctuations and environmental changes in central Patagonia (44° S - 49° S) from the Last Glacial Maximum (LGM) through to the Holocene. Well-dated glacial chronologies from the southern mid-latitudes can inform on the synchronicity of glacial advances worldwide and provide insight on the drivers of southern hemisphere glaciations. In central Patagonia, two large outlet lobes of the former Patagonian Ice Sheet advanced in broad synchrony with the global LGM. In contrast to other parts of Patagonia, there is no convincing evidence for a more extensive local LGM advance during Marine Isotope Stage 3. Deglaciation initiated at ca. 19 ka, earlier than in other parts of Patagonia and regionally in the Southern Hemisphere, and rapid deglaciation saw ice margins retreat in places by at least 80-120 km within a few millennia. The Lateglacial glacier margins are poorly constrained, but an ice mass substantial enough to maintain a large regional proglacial lake must have persisted at this time. The timing of lake drainage and opening of the Río Baker drainage route to the Pacific Ocean is debated; the only directly dated shoreline suggests this occurred at the end of the Antarctic Cold Reversal at 12.7 ka. Palaeoecological evidence for cooling during the Antarctic Cold Reversal or Younger Dryas remains equivocal, which may reflect both the eurythermic nature of Patagonian vegetation and shifting Southern Westerly Winds. Eastern outlet glaciers appear to have advanced or stabilised at the Lateglacial/Holocene transition when palaeoenvironmental records indicate warmer and drier conditions, but the reason for this is unclear. Our review reveals both spatial and temporal gaps in available data that provide avenues for future research