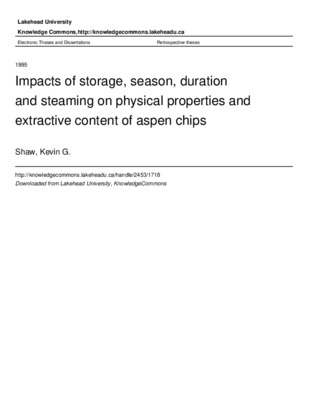 Impacts of storage, season, duration and steaming on physical properties and extractive content of aspen chips

An investigation was made into the rates of moisture content, extractives and basic wood density losses that occur when trembling aspen (Populus tremuloides Michx.) wood chips are stored during different seasons of the year, in a chip pile. Seasoning is required for the pulping of trembling aspen in order to reduce the extractive content to a level that will minimize the occurrences of pitch build-up and problems in the kraft pulping process. The hypothesis for this study was that there are significant differences in losses of extractives, moisture content and basic density within a chip pile?and that the extractives losses in the pile centre would match extractives losses in roundwood in a much shorter time. The change of extractives can be achieved in normal outside chip storage periods by using chips from the interior of a chip pile or in shorter periods through steaming chips under controlled conditions. Time was a very significant factor during the storage. The study found that the closer to the middle of the pile, the hotter the temperatures became. The largest rate of heat build-up was found in the first 12 days. The middle of the pile showed the lowest average moisture content after 4 months (i.e., 38.2%), whereas the top of the pile showed the highest moisture content after 4 months (i.e., 45.2%). The absolute rate of extractives loss was, on average, 0.3%/month for the 4 month study period. However, for the first month, the absolute rate was 1.0%/month (i.e., 31% of the original) and for the second month it dropped down to 0.6%/month (i.e., 39 % of the original). There were no significant changes in the extractive content from month 2 to month 4. The bottom middle of the chip pile resulted in the largest loss of extractives (i.e., final extractive content of 1.8% after 4 months). No comparison was made between the aspen chip pile built in the summer with the one built in the winter since the winter pile remained frozen for the duration of the study. It was calculated that the extractive content after 1.5 weeks in the summer pile would equal the extractive content (i.e., 2.5%) of the aged roundwood (i.e., for 1 year). A minimum of emphasis should be placed on this since the sample size used to calculate the extractive content of the aged roundwood was small. The rate of basic density loss in the summer chip pile was 2.4%/month for the 4 month study period. The average moisture content of the fresh arriving chips was 47.9% as compared with the moisture content of the digester chips (i.e., 40.2%). The extractive content of the fresh arriving chips was 3. 6 %, as compared with 2.9% for the digester chips. There were no significant differences between the average basic densities for the fresh arriving chips and the digester chips (i.e., 0.41 g/cm3) . The study showed that steaming does not accelerate the loss of extractives in aspen chips. A method of chip reclaim is presented that collects, with the aid of an auger travelling underneath the chip pile, only the bottom middle chips. As these chips are collected, chips from the other regions of the pile fill in the gaps. A continuous chip seasoning period of 2 weeks is recommended to allow for the maximum amount of seasoning in the shortest time period. A chip pile inventory of 42 308 m3 would be sufficient to allow for a 2 week inventory, however, a chip inventory of 3 weeks is recommended (i.e., 63 462 m3 to allow for an extra weeks buffer). It is also recommended that Avenor consider continuous monitoring of the digester extractive contents to know that they are sufficiently low, as well as to try and correlate any operating problems in the mill with the extractive content of the chips that had entered