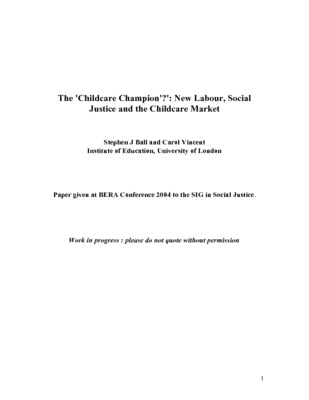 By Carol Vincent and Stephen Ball
Get PDF (231 KB)

Childcare as a policy issue has received unprecedented attention under New Labour, through various aspects of The National Childcare Strategy introduced in 1998. This policy focus looks set to continue, with childcare likely to be a major topic in the next manifesto. Early Years care and education is a productive area for New Labour as initiatives here can address several agendas: increasing social inclusion, revitalizing the labour market, and raising standards in education. The provision of childcare is seen as having the potential to bring women back into the workforce, modelling childrearing skills to parents understood as being in need of such support, and giving children the skills and experience they need to succeed in compulsory education. The existing market in childcare is a largely private sector one with the government recently introducing tax credits designed to make childcare more affordable and accessible to lower income parents. This paper draws on material gathered during a two year ESRC funded project looking at the choice and provision of childcare in London. It argues firstly that social justice in childcare is currently understood to be primarily a matter of access, and secondly demonstrates that even for privileged middle class consumers, the childcare market is a very ‘peculiar’ one, especially when compared to the markets of economic theory. We conclude by commenting on the lack of parental voice shaping the future direction and development of the childcare market