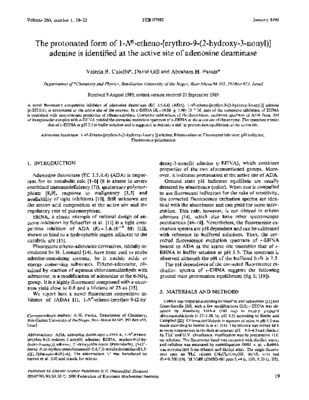 AbstractA novel fluorescent competitive inhibitor of adenosine deaminase (EC 3.5.4.4) (ADA), 1-N6-etheno-[erythro-9-(2-hydroxy-3-nonyl)] adenine (ϵ-EHNA), is protonated at the active site of the enzyme. In ϵ-EHNA [K1 = (4.06 ± 1.00) 10−6 M] part of the competive inhibition of EHNA is combined with spectroscopic properties of etheno-adenines. Computer subtraction of the fluorescence excitation spectrum of ADA from that of its equimolar complex with ϵ-EHNA yielded the corrected excitation spectrum of ϵ-EHNA at the active site of the enzyme. This spectrum mimics that of ϵ-EHNA at pH 5.5 in buffer solution and is suggested to indicate a shift in protonation equilibrium at the active site