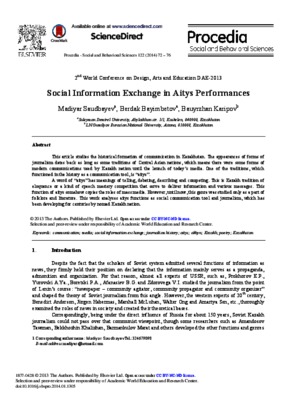 AbstractThis article studies the historical formation of communication in Kazakhstan. The appearances of forms of journalism dates back as long as some traditions of Central Asian nations, which means there were some forms of modern communications used by Kazakh nation until the launch of today's media. One of the traditions, which functioned in the history as a communication tool, is “aitys”.A word of “aitys” has meanings of telling, debating, describing and competing. This is Kazakh tradition of eloquence or a kind of speech mastery competition that serve to deliver information and various messages. This function of aitys somehow copies the roles of mass media. However, until now, this genre was studied only as a part of folklore and literature. This work analyses aitys functions as social communication tool and journalism, which has been developing for centuries by nomad Kazakh nation