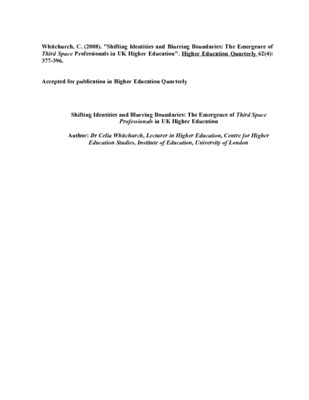 This paper adds to earlier reviews by the author of the changing roles and identities of contemporary professional staff in UK higher education (Whitchurch, 2004; 2006a; 2006b), and builds on a categorisation of professional staff identities as having bounded, cross-boundary, and unbounded characteristics (Whitchurch, 2008, forthcoming). Drawing on a study of fifty-four professional managers in the United Kingdom, Australia and the United States, it describes a further category of blended professionals, who have mixed backgrounds and portfolios, comprising elements of both professional and academic activity. The paper goes on to introduce the concept of third space as an emergent territory between academic and professional domains, which is colonised primarily by less bounded forms of professional. The implications of these developments for institutions and for individuals are considered, and some international comparisons drawn. Finally, it is suggested that third space working may be indicative of future trends in professional identities, which may increasingly coalesce with those of academic colleagues who undertake project- and managementoriented roles, so that new forms of third space professional are likely to continue to emerge