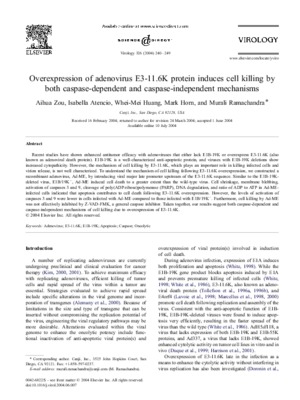 AbstractRecent studies have shown enhanced antitumor efficacy with adenoviruses that either lack E1B-19K or overexpress E3-11.6K (also known as adenoviral death protein). E1B-19K is a well-characterized anti-apoptotic protein, and viruses with E1B-19K deletions show increased cytopathicity. However, the mechanism of cell killing by E3-11.6K, which plays an important role in killing infected cells and virion release, is not well characterized. To understand the mechanism of cell killing following E3-11.6K overexpression, we constructed a recombinant adenovirus, Ad-ME, by introducing viral major late promoter upstream of the E3-11.6K sequence. Similar to the E1B-19K-deleted virus, E1B/19K−, Ad-ME induced cell death to a greater extent than the wild-type virus. Cell shrinkage, membrane blebbing, activation of caspases 3 and 9, cleavage of poly(ADP-ribose)polymerase (PARP), DNA degradation, and ratio of ADP to ATP in Ad-ME-infected cells indicated that apoptosis contributes to cell death following E3-11.6K overexpression. However, the levels of activation of caspases 3 and 9 were lower in cells infected with Ad-ME compared to those infected with E1B/19K−. Furthermore, cell killing by Ad-ME was not effectively inhibited by Z-VAD-FMK, a general caspase inhibitor. Taken together, our results suggest both caspase-dependent and caspase-independent mechanisms of cell killing due to overexpression of E3-11.6K