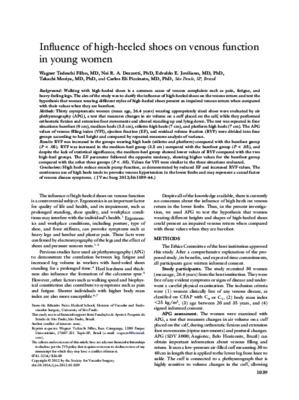 Influence of high-heeled shoes on venous function in young women

BackgroundWalking with high-heeled shoes is a common cause of venous complaints such as pain, fatigue, and heavy-feeling legs. The aim of the study was to clarify the influence of high-heeled shoes on the venous return and test the hypothesis that women wearing different styles of high-heeled shoes present an impaired venous return when compared with their values when they are barefoot.MethodsThirty asymptomatic women (mean age, 26.4 years) wearing appropriately sized shoes were evaluated by air plethysmography (APG), a test that measures changes in air volume on a cuff placed on the calf, while they performed orthostatic flexion and extension foot movements and altered standing up and lying down. The test was repeated in four situations: barefoot (0 cm), medium heels (3.5 cm), stiletto high heels (7 cm), and platform high heels (7 cm). The APG values of venous filling index (VFI), ejection fraction (EF), and residual volume fraction (RVF) were divided into four groups according to heel height and compared by repeated-measures analysis of variance.ResultsRVF was increased in the groups wearing high heels (stiletto and platform) compared with the barefoot group (P < .05). RVF was increased in the medium-heel group (3.5 cm) compared with the barefoot group (P < .05), and despite the lack of statistical significance, the medium-heel group showed lower values of RVF compared with the two high-heel groups. The EF parameter followed the opposite tendency, showing higher values for the barefoot group compared with the other three groups (P < .05). Values for VFI were similar in the three situations evaluated.ConclusionsHigh heels reduce muscle pump function, as demonstrated by reduced EF and increased RVF values. The continuous use of high heels tends to provoke venous hypertension in the lower limbs and may represent a causal factor of venous disease symptoms