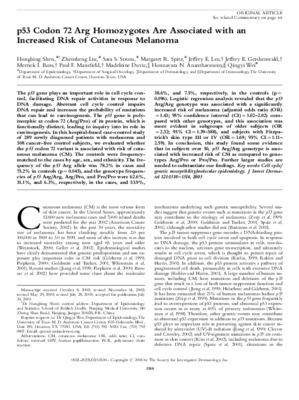 The p53 gene plays an important role in cell cycle control, facilitating DNA repair activities in response to DNA damage. Aberrant cell cycle control impairs DNA repair and increases the probability of mutations that can lead to carcinogenesis. The p53 gene is polymorphic at codon 72 (Arg/Pro) of its protein, which is functionally distinct, leading to inquiry into its role in carcinogenesis. In this hospital-based case-control study of 289 newly diagnosed patients with melanoma and 308 cancer-free control subjects, we evaluated whether the p53 codon 72 variant is associated with risk of cutaneous melanoma (CM). The controls were frequency-matched to the cases by age, sex, and ethnicity. The frequency of the p53 Arg allele was 78.2% in cases and 73.2% in controls (p=0.045), and the genotype frequencies of p53 Arg/Arg, Arg/Pro, and Pro/Pro were 62.6%, 31.1%, and 6.3%, respectively, in the cases, and 53.9%, 38.6%, and 7.5%, respectively, in the controls (p=0.096). Logistic regression analysis revealed that the p53 Arg/Arg genotype was associated with a significantly increased risk of melanoma (adjusted odds ratio (OR)=1.43; 95% confidence interval (CI)=1.02–2.02) compared with other genotypes, and this association was more evident in subgroups of older subjects (OR=2.32; 95% CI=1.39–388), and subjects with Fitzpatrick's skin type III or IV (OR=1.69; 95% CI=1.11–2.59). In conclusion, this study found some evidence that in subjects over 50, p53 Arg/Arg genotype is associated with increased risk of CM as compared to genotypes Arg/Pro or Pro/Pro. Further larger studies are needed to substantiate our findings