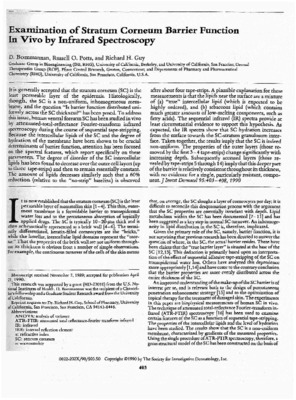 It is generally accepted that the stratum corneum (SC) is the least permeable layer of the epidermis. Histologically, though, the SC is a non-uniform, inhomogeneous membrane, and the question “Is barrier function distributed uniformly across the SC thickness?” has been posed. To address this issue, human ventral forearm SC has been studied in vivo by attenuated-total-reflectance Fourier-transform infrared spectroscopy during the course of sequential tape-stripping. Because the intercellular lipids of the SC and the degree of hydration of the membrane have been shown to be crucial determinants of barrier function, attention has been focused on the spectral features, which report specifically on these parameters. The degree of disorder of the SC intercellular lipids has been found to decrease over the outer cell layers (up to three tape-strips) and then to remain essentially constant. The amount of lipids decreases similarly such that a 60% reduction (relative to the “no-strip” baseline) is observed after about four tape-strips. A plausible explanation for these measurements is that the lipids near the surface are a mixture of (a) “true” intercellular lipid (which is expected to be highly ordered), and (b) sebaceous lipid (which contains much greater amounts of low-melting components, such as fatty acids). The sequential infrared (IR) spectra provide at least circumstantial evidence to support this hypothesis. As expected, the IR spectra show that SC hydration increases from the surface towards the SC-stratum granulosum interface. Taken together, the results imply that the SC is indeed non-uniform. The properties of the outer layers (those removed by the first 3-4 tape-strips) change significantly with increasing depth. Subsequently accessed layers (those revealed by tape-strips 5 through 14) imply that this deeper part of the barrier is relatively consistent throughout its thickness, with no evidence for a single, particularly resistant, component