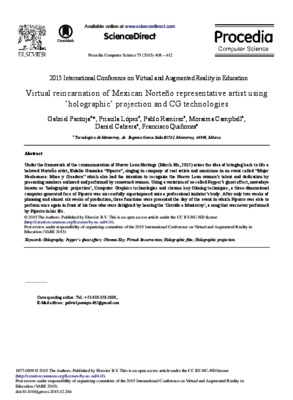 AbstractUnder the framework of the commemoration of Nuevo Leon Heritage (March 8th, 2015) arises the idea of bringing back to life a beloved Norteño artist, Eulalio Gonzalez “Piporro”, singing in company of real artists and musicians in an event called “Mujer Neoleonesa: Musa y Creadora” which also had the intention to recognize the Nuevo Leon women's talent and dedication by presenting numbers authored and performed by renowned women. Using a variation of so-called Pepper's ghost effect, nowadays known as ‘holographic projection’, Computer Graphics technologies and chroma key filming techniques, a three-dimensional computer-generated face of Piporro was successfully superimposed onto a professional imitator's body. After only two weeks of planning and almost six weeks of production, three functions were presented the day of the event in which Piporro was able to perform once again in front of his fans who were delighted by hearing the “Corrido a Monterrey’, a song that was never performed by Piporro in his life