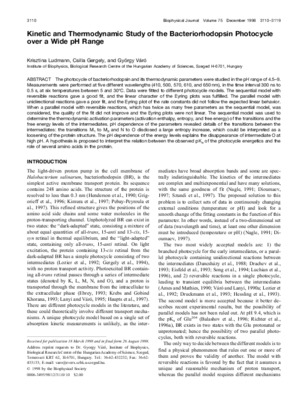 AbstractThe photocycle of bacteriorhodopsin and its thermodynamic parameters were studied in the pH range of 4.5–9. Measurements were performed at five different wavelengths (410, 500, 570, 610, and 650nm), in the time interval 300ns to 0.5s, at six temperatures between 5 and 30°C. Data were fitted to different photocycle models. The sequential model with reversible reactions gave a good fit, and the linear character of the Eyring plots was fulfilled. The parallel model with unidirectional reactions gave a poor fit, and the Eyring plot of the rate constants did not follow the expected linear behavior. When a parallel model with reversible reactions, which has twice as many free parameters as the sequential model, was considered, the quality of the fit did not improve and the Eyring plots were not linear. The sequential model was used to determine the thermodynamic activation parameters (activation enthalpy, entropy, and free energy) of the transitions and the free energy levels of the intermediates. pH dependence of the parameters revealed details of the transitions between the intermediates: the transitions M1 to M2 and N to O disclosed a large entropy increase, which could be interpreted as a loosening of the protein structure. The pH dependence of the energy levels explains the disappearance of intermediate O at high pH. A hypothesis is proposed to interpret the relation between the observed pKa of the photocycle energetics and the role of several amino acids in the protein