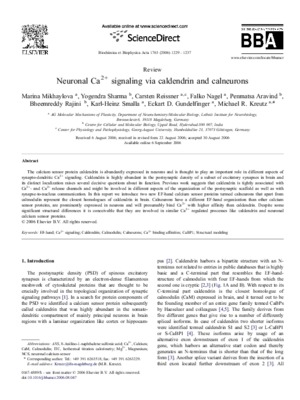 AbstractThe calcium sensor protein caldendrin is abundantly expressed in neurons and is thought to play an important role in different aspects of synapto-dendritic Ca2+ signaling. Caldendrin is highly abundant in the postsynaptic density of a subset of excitatory synapses in brain and its distinct localization raises several decisive questions about its function. Previous work suggests that caldendrin is tightly associated with Ca2+- and Ca2+ release channels and might be involved in different aspects of the organization of the postsynaptic scaffold as well as with synapse-to-nucleus communication. In this report we introduce two new EF-hand calcium sensor proteins termed calneurons that apart from calmodulin represent the closest homologues of caldendrin in brain. Calneurons have a different EF-hand organization than other calcium sensor proteins, are prominently expressed in neurons and will presumably bind Ca2+ with higher affinity than caldendrin. Despite some significant structural differences it is conceivable that they are involved in similar Ca2+ regulated processes like caldendrin and neuronal calcium sensor proteins