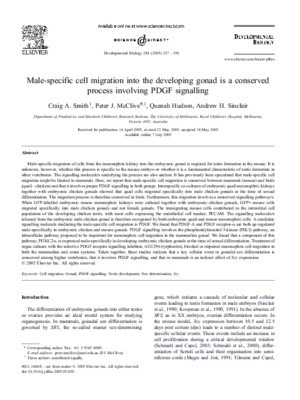 AbstractMale-specific migration of cells from the mesonephric kidney into the embryonic gonad is required for testis formation in the mouse. It is unknown, however, whether this process is specific to the mouse embryo or whether it is a fundamental characteristic of testis formation in other vertebrates. The signalling molecule/s underlying the process are also unclear. It has previously been speculated that male-specific cell migration might be limited to mammals. Here, we report that male-specific cell migration is conserved between mammals (mouse) and birds (quail–chicken) and that it involves proper PDGF signalling in both groups. Interspecific co-cultures of embryonic quail mesonephric kidneys together with embryonic chicken gonads showed that quail cells migrated specifically into male chicken gonads at the time of sexual differentiation. The migration process is therefore conserved in birds. Furthermore, this migration involves a conserved signalling pathway/s. When GFP-labelled embryonic mouse mesonephric kidneys were cultured together with embryonic chicken gonads, GFP+ mouse cells migrated specifically into male chicken gonads and not female gonads. The immigrating mouse cells contributed to the interstitial cell population of the developing chicken testis, with most cells expressing the endothelial cell marker, PECAM. The signalling molecule/s released from the embryonic male chicken gonad is therefore recognised by both embryonic quail and mouse mesonephric cells. A candidate signalling molecule mediating the male-specific cell migration is PDGF. We found that PDGF-A and PDGF receptor-α are both up-regulated male-specifically in embryonic chicken and mouse gonads. PDGF signalling involves the phosphotidylinositol 3-kinase (PIK3) pathway, an intracellular pathway proposed to be important for mesonephric cell migration in the mammalian gonad. We found that a component of this pathway, PI3KC2α, is expressed male-specifically in developing embryonic chicken gonads at the time of sexual differentiation. Treatment of organ cultures with the selective PDGF receptor signalling inhibitor, AG1296 (tyrphostin), blocked or impaired mesonephric cell migration in both the mammalian and avian systems. Taken together, these studies indicate that a key cellular event in gonadal sex differentiation is conserved among higher vertebrates, that it involves PDGF signalling, and that in mammals is an indirect effect of Sry expression