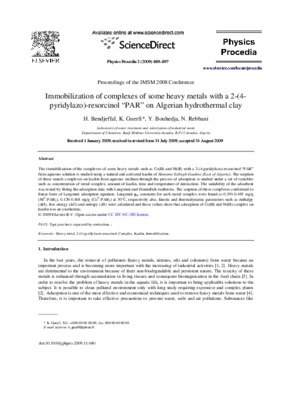 AbstractThe immobilization of the complexes of some heavy metals such as Co(II) and Ni(II) with a 2-(4-pyridylazo)-resorcinol “PAR” from aqueous solution is studied using a natural and activated kaolin of Hameme Edbegh-Guelma (East of Algeria). The sorption of these metals complexes on kaolin from aqueous medium through the process of adsorption is studied under a set of variables such as concentration of metal complex, amount of kaolin, time and temperature of interaction. The suitability of the adsorbent was tested by fitting the adsorption data with Langmuir and Freundlich isotherms. The sorption of these complexes conformed to linear form of Langmuir adsorption equation. Langmuir qm constants for each metal complex were found as 0.391–0.493 mg/g (NiII-PAR2), 0.129-0.168 mg/g (CoII-PAR2) at 30∘C, respectively also, kinetic and thermodynamic parameters such as enthalpy (ΔH), free energy (ΔG) and entropy (ΔS) were calculated and these values show that adsorption of Co(II) and Ni(II) complex on kaolin was an exothermic