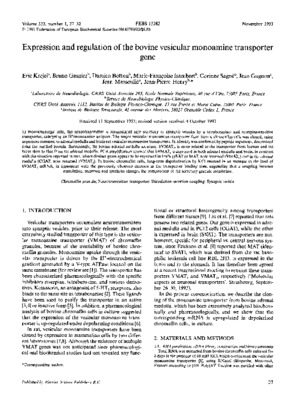 Expression and regulation of the bovine vesicular monoamine transporter gene

AbstractIn monoaminergic cells, the neurotransmitter is accumulated into secretory or synaptic vesicles by a tetrabenazine- and reserpine-sensitive transporter, catalyzing an H+/monoamine antiport. The major vesicular monoamine transporter from bovine chromaffin cells was cloned, using sequences common to adrenal medulla and brain rat vesicular monoamine transporters. Its identity was confirmed by peptide sequences, determined from the purified protein. Surprisingly, the bovine adrenal medulla sequence, bVMAT2, is more related to the transporter from human and rat brain than to that from rat adrenal medulla. PCR amplification showed that bVMAT2, is expressed in both adrenal medulla and brain, in contrast with the situation reported in rats, where distinct genes appear to be expressed in brain (SVAT or MAT, now renamed rVMAT2) and in the adrenal medulla (CGAT, now renamed rVMAT1). In bovine chromaffin cells, long-term depolarization by KC1 resulted in an increase in the level of bVMAT2 mRNA, in agreement with the previously observed increase in the transporter binding sites, suggesting that a coupling between stimulation, secretion and synthesis changes the composition of the secretory granule membrane