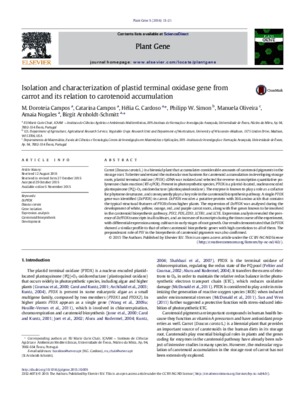 AbstractCarrot (Daucus carota L.) is a biennial plant that accumulates considerable amounts of carotenoid pigments in the storage root. To better understand the molecular mechanisms for carotenoid accumulation in developing storage roots, plastid terminal oxidase (PTOX) cDNA was isolated and selected for reverse-transcription quantitative polymerase chain reaction (RT-qPCR). Present in photosynthetic species, PTOX is a plastid-located, nucleus encoded plastoquinone (PQ)-O2 oxidoreductase (plastioquinol oxidase). The enzyme is known to play a role as a cofactor for phytoene desaturase, and consequently plays a key role in the carotenoid biosynthesis pathway. A single PTOX gene was identified (DcPTOX) in carrot. DcPTOX encodes a putative protein with 366 amino acids that contains the typical structural features of PTOXs from higher plants. The expression of DcPTOX was analysed during the development of white, yellow, orange, red, and purple carrot roots, along with five genes known to be involved in the carotenoid biosynthesis pathway, PSY2, PDS, ZDS1, LCYB1, and LCYE. Expression analysis revealed the presence of DcPTOX transcripts in all cultivars, and an increase of transcripts during the time course of the experiment, with differential expression among cultivars in early stages of root growth. Our results demonstrated that DcPTOX showed a similar profile to that of other carotenoid biosynthetic genes with high correlation to all of them. The preponderant role of PSY in the biosynthesis of carotenoid pigments was also confirmed