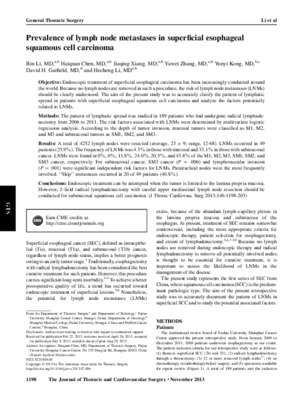 ObjectiveEndoscopic treatment of superficial esophageal carcinoma has been increasingly conducted around the world. Because no lymph nodes are removed in such a procedure, the risk of lymph node metastases (LNMs) should be clearly understood. The aim of the present study was to accurately clarify the pattern of lymphatic spread in patients with superficial esophageal squamous cell carcinoma and analyze the factors potentially related to LNMs.MethodsThe pattern of lymphatic spread was studied in 189 patients who had undergone radical lymphadenectomy from 2006 to 2011. The risk factors associated with LNMs were determined by multivariate logistic regression analysis. According to the depth of tumor invasion, mucosal tumors were classified as M1, M2, and M3 and submucosal tumors as SM1, SM2, and SM3.ResultsA total of 4252 lymph nodes were resected (average, 23 ± 9; range, 12-68). LNMs occurred in 49 patients (25.9%). The frequency of LNMs was 4.3% in those with mucosal and 33.1% in those with submucosal cancer. LNMs were found in 0%, 0%, 11.8%, 24.0%, 20.5%, and 43.8% of the M1, M2, M3, SM1, SM2, and SM3 cancer, respectively. For submucosal cancer, SM3 cancer (P = .006) and lymphovascular invasion (P = .001) were significant independent risk factors for LNMs. Paratracheal nodes were the most frequently involved. “Skip” metastases occurred in 20 of 49 patients (40.8%).ConclusionsEndoscopic treatment can be attempted when the tumor is limited to the lamina propria mucosa. However, 2-field radical lymphadenectomy with careful upper mediastinal lymph node resection should be conducted for submucosal squamous cell carcinoma