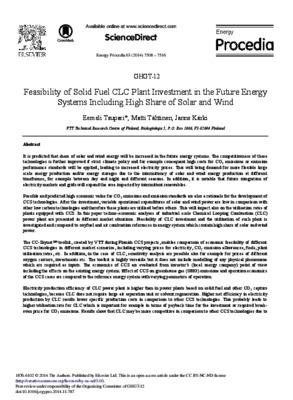 AbstractIt is predicted that share of solar and wind energy will be increased in the future energy systems. The competitiveness of these technologies is further improved if strict climate policy and for example consequent high costs for CO2 emissions or emission performance standards will be applied, leading to increased electricity prices. This will bring demand for more flexible large scale energy production and/or energy storages due to the intermittency of solar and wind energy production at different timeframes, for example between day and night and different seasons. In addition, it is notable that future integration of electricity markets and grids will expand the area impacted by intermittent renewables.Possible and predicted high economic value for CO2 emissions and emission standards are also a rationale for the development of CCS technologies. After the investment, variable operational expenditures of solar and wind power are low in comparison with other low carbon technologies and therefore these plants are utilised before others. This will impact also on the utilisation rates of plants equipped with CCS. In this paper techno-economic analyses of industrial scale Chemical Looping Combustion (CLC) power plant are presented in different market situations. Feasibility of CLC investment and the utilization of such plant is investigated and compared to oxyfuel and air combustion references in energy system which contain high share of solar and wind power.The CC-Skynet™ toolkit, created by VTT during Finnish CCS projects, enables comparison of economic feasibility of different CCS technologies in different market scenarios, including varying prices for electricity, CO2 emission allowances, fuels, plant utilisation rates, etc. In addition, in the case of CLC, sensitivity analysis are possible also for example for prices of different oxygen carriers, investments etc. The toolkit is highly versatile but it does not include modelling of any physical phenomena which are required as inputs. The economics of CCS are evaluated from investor's (local energy company) point of view including the effects on the existing energy system. Effect of CCS on greenhouse gas (GHG) emissions and operation economics of the CCS cases are compared to the reference energy system with varying parameters of operation.Electricity production efficiency of CLC power plant is higher than in power plants based on solid fuel and other CO2 capture technologies, because CLC does not require large air separation unit or solvent regeneration. Higher net efficiency in electricity production by CLC results lower specific production costs in comparison to other CCS technologies. This probably leads to higher utilisation rate for CLC which is important for example in terms of payback time for the investment or required break- even price for CO2 emissions. Results show that CLC may be more competitive in comparison to other CCS technologies due tohigher electrical efficiency. Economic feasibility is dependent on several factors which are uncertain in the case of future energy system. However, it is probable that high CO2 prices lead to increased electric price such that electrical efficiency has large dominant effect on feasibility. Investment costs do not dominate in comparison between CCS technologies. Feasibility of CCS is different between geographical locations due sensitivity of transport and storage