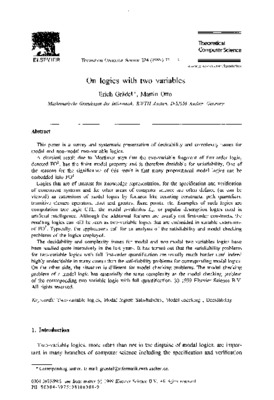 On logics with two variables

By Erich Grädel and Martin Otto
Get PDF (3 MB)

AbstractThis paper is a survey and systematic presentation of decidability and complexity issues for modal and non-modal two-variable logics.A classical result due to Mortimer says that the two-variable fragment of first-order logic, denoted FO2, has the finite model property and is therefore decidable for satisfiability. One of the reasons for the significance of this result is that many propositional modal logics can be embedded into FO2.Logics that are of interest for knowledge representation, for the specification and verification of concurrent systems and for other areas of computer science are often defined (or can be viewed) as extensions of modal logics by features like counting constructs, path quantifiers, transitive closure operators, least and greatest fixed points, etc. Examples of such logics are computation tree logic CTL, the modal μ-calculus Lμ, or popular description logics used in artificial intelligence. Although the additional features are usually not first-order constructs, the resulting logics can still be seen as two-variable logics that are embedded in suitable extensions of FO2. Typically, the applications call for an analysis of the satisfiability and model checking problems of the logics employed.The decidability and complexity issues for modal and non-modal two-variables logics have been studied quite intensively in the last years. It has turned out that the satisfiability problems for two-variable logics with full first-order quantification are usually much harder (and indeed highly undecidable in many cases) than the satisfiability problems for corresponding modal logics. On the other side, the situation is different for model checking problems. The model checking problem of a modal logic has essentially the same complexity as the model checking problem of the corresponding two variable logic with full quantification