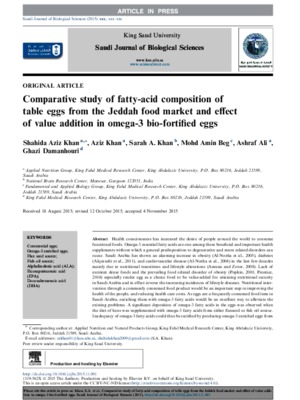 AbstractHealth consciousness has increased the desire of people around the world to consume functional foods. Omega-3 essential fatty acids are one among these beneficial and important health supplements without which a general predisposition to degenerative and stress related disorders can occur. Saudi Arabia has shown an alarming increase in obesity (Al-Nozha et al., 2005), diabetes (Alqurashi et al., 2011), and cardiovascular disease (Al-Nozha et al., 2004) in the last few decades mainly due to nutritional transitions and lifestyle alterations (Amuna and Zotor, 2008). Lack of nutrient dense foods and the prevailing food related disorder of obesity (Popkin, 2001; Prentice, 2014) especially render egg as a choice food to be value-added for attaining nutritional security in Saudi Arabia and in effect reverse the increasing incidences of lifestyle diseases. Nutritional intervention through a commonly consumed food product would be an important step in improving the health of the people, and reducing health care costs. As eggs are a frequently consumed food item in Saudi Arabia, enriching them with omega-3 fatty acids would be an excellent way to alleviate the existing problems. A significant deposition of omega-3 fatty acids in the eggs was observed when the diet of hens was supplemented with omega-3 fatty acids from either flaxseed or fish oil source. Inadequacy of omega-3 fatty acids could thus be rectified by producing omega-3 enriched eggs from hens supplemented with flaxseed or fish oil source, and thus contribute toward better health choice of the consumer