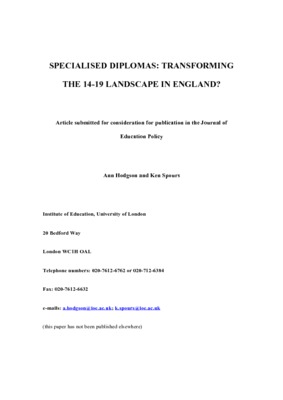 Reforming vocational education in the English education and training system has occupied governments for at least the last three decades, the latest development being the introduction of 14 linesi of Specialised Diplomas. Using an historical analysis of qualifications reform, we suggest they are unlikely to transform 14-19 education and training. The failure to reform academic qualifications alongside their vocational equivalents is likely to result in ‘academic drift’, lack of status and a relatively low level of uptake for these new awards, a process compounded by low employer recognition of broad vocational qualifications. In rejecting the Tomlinson Report’s central proposal for a unified diploma system covering all 14-19 education and training, we argue that the Government may have condemned the Specialised Diplomas to become a middle-track qualification for a minority of 14-19 years olds, situated between the majority academic pathway and the sparsely populated apprenticeship route