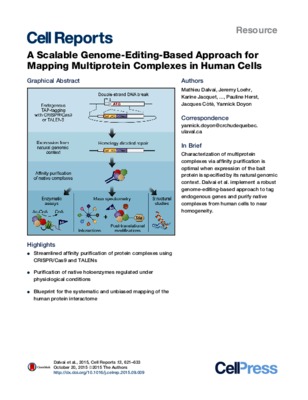 SummaryConventional affinity purification followed by mass spectrometry (AP-MS) analysis is a broadly applicable method used to decipher molecular interaction networks and infer protein function. However, it is sensitive to perturbations induced by ectopically overexpressed target proteins and does not reflect multilevel physiological regulation in response to diverse stimuli. Here, we developed an interface between genome editing and proteomics to isolate native protein complexes produced from their natural genomic contexts. We used CRISPR/Cas9 and TAL effector nucleases (TALENs) to tag endogenous genes and purified several DNA repair and chromatin-modifying holoenzymes to near homogeneity. We uncovered subunits and interactions among well-characterized complexes and report the isolation of MCM8/9, highlighting the efficiency and robustness of the approach. These methods improve and simplify both small- and large-scale explorations of protein interactions as well as the study of biochemical activities and structure-function relationships