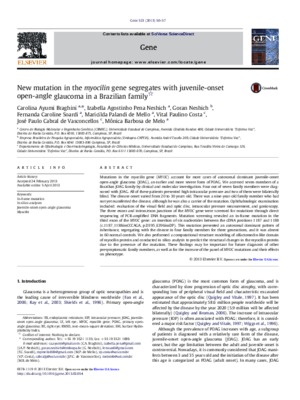 AbstractMutations in the myocilin gene (MYOC) account for most cases of autosomal dominant juvenile-onset open-angle glaucoma (JOAG), an earlier and more severe form of POAG. We accessed seven members of a Brazilian JOAG family by clinical and molecular investigation. Four out of seven family members were diagnosed with JOAG. All of these patients presented high intraocular pressure and two of them were bilaterally blind. The disease onset varied from 20 to 30years old. There was a nine-year-old family member who had not yet manifested the disease, although he was also a carrier of the mutation. Ophthalmologic examination included: evaluation of the visual field and optic disc, intraocular pressure measurement, and gonioscopy. The three exons and intron/exon junctions of the MYOC gene were screened for mutations through direct sequencing of PCR-amplified DNA fragments. Mutation screening revealed an in-frame mutation in the third exon of the MYOC gene: an insertion of six nucleotides between the cDNA positions 1187 and 1188 (c.1187_1188insCCCAGA, p.D395_E396insDP). This mutation presented an autosomal dominant pattern of inheritance, segregating with the disease in four family members for three generations, and it was absent in 60 normal controls. We also performed a computational structure modeling of olfactomedin-like domain of myocilin protein and conducted in silico analysis to predict the structural changes in the myocilin protein due to the presence of the mutation. These findings may be important for future diagnosis of other presymptomatic family members, as well as for the increase of the panel of MYOC mutations and their effects on phenotype