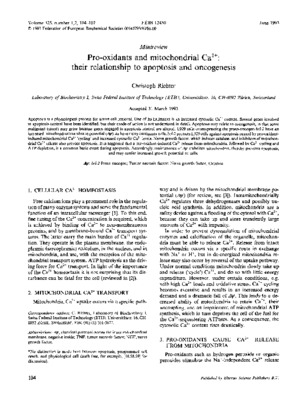 Pro-oxidants and mitochondrial Ca2+: their relationship to apoptosis and oncogenesis

By Christoph Richter
Get PDF (471 KB)

AbstractApoptosis is a physiological process for active cell removal. One of its hallmarks is an increased cytosolic Ca2+ content. Several genes involved in apoptosis control have been identified, but their mode of action is not understood in detail. Apoptosis may relate to oncogenesis, in that some malignant tumors may grow because genes engaged in apoptosis control are altered. L929 cells overexpressing the proto-oncogen bcl-2 have an increased mitochondrial membrane potential (δψ), as have many carcinoma cells, bcl-2 protects L929 cells against apoptosis caused by pro-oxidant-induced mitochondrial Ca2+ ‘cycling’ and increased cytosolic Ca2+ levels. Nerve growth factor, which induces catalase, and inhibitors of mitochondrial Ca2+ release also prevent apoptosis. It is suggested that a pro-oxidant-induced Ca2+ release from mitochondria, followed by Ca2+ cycling and ATP depletion, is a common basic event during apoptosis. Accordingly, maintenance of δψ stabilizes mitochondria, thereby prevents apoptosis, and may confer increased growth potential to cells