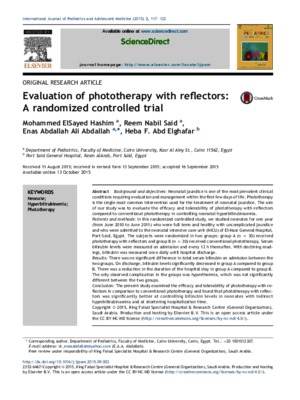 Evaluation of phototherapy with reflectors: A randomized controlled trial

AbstractBackground and objectivesNeonatal jaundice is one of the most prevalent clinical conditions requiring evaluation and management within the first few days of life. Phototherapy is the single most common intervention used for the treatment of neonatal jaundice. The aim of our study was to evaluate the efficacy and tolerability of phototherapy with reflectors compared to conventional phototherapy in controlling neonatal hyperbilirubinaemia.Patients and methodsIn this randomized controlled study, we studied neonates for one year (from June 2010 to June 2011) who were full term and healthy with uncomplicated jaundice and who were admitted to the neonatal intensive care unit (NICU) of El-Nasr General Hospital, Port-Said, Egypt. The subjects were randomized in two groups: group A (n = 30) received phototherapy with reflectors and group B (n = 30) received conventional phototherapy. Serum bilirubin levels were measured on admission and every 12 h thereafter. With declining readings, bilirubin was measured once daily until hospital discharge.ResultsThere was no significant difference in total serum bilirubin on admission between the two groups. On discharge, bilirubin levels significantly decreased in group A compared to group B. There was a reduction in the duration of the hospital stay in group A compared to group B. The only observed complication in the groups was hyperthermia, which was not significantly different between the two groups.ConclusionThe present study examined the efficacy and tolerability of phototherapy with reflectors in comparison to conventional phototherapy and found that phototherapy with reflectors was significantly better at controlling bilirubin levels in neonates with indirect hyperbilirubinaemia and at shortening hospitalization time