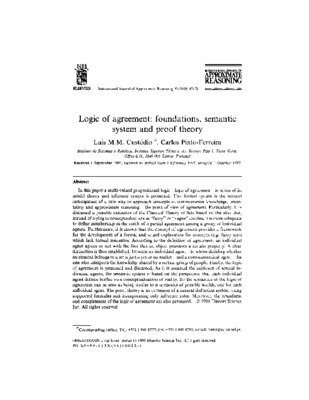 By Luis M.M. Custódio and Carlos Pinto-Ferreira
Get PDF (2 MB)

AbstractIn this paper a multi-valued propositional logic — logic of agreement — in terms of its model theory and inference system is presented. This formal system is the natural consequence of a new way to approach concepts as commonsense knowledge, uncertainty and approximate reasoning — the point of view of agreement. Particularly, it is discussed a possible extension of the Classical Theory of Sets based on the idea that, instead of trying to conceptualize sets as “fuzzy” or “vague” entities, it is more adequate to define membership as the result of a partial agreement among a group of individual agents. Furthermore, it is shown that the concept of agreement provides a framework for the development of a formal and sound explanation for concepts (e.g. fuzzy sets) which lack formal semantics. According to the definition of agreement, an individual agent agrees or not with the fact that an object possesses a certain property. A clear distinction is then established, between an individual agent — to whom deciding whether an element belongs to a set is just a yes or no matter — and a commonsensical agent — the one who interprets the knowledge shared by a certain group of people. Finally, the logic of agreement is presented and discussed. As it is assumed the existence of several individual agents, the semantic system is based on the perspective that each individual agent defines her/his own conceptualization of reality. So the semantics of the logic of agreement can be seen as being similar to a semantics of possible worlds, one for each individual agent. The proof theory is an extension of a natural deduction system, using supported formulas and incorporating only inference rules. Moreover, the soundness and completeness of the logic of agreement are also presented