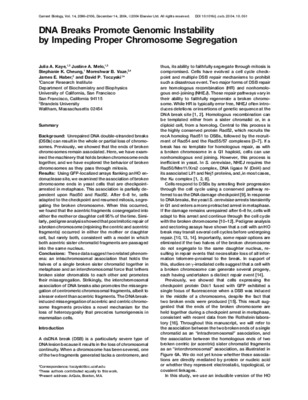 AbstractBackground: Unrepaired DNA double-stranded breaks (DSBs) can result in the whole or partial loss of chromosomes. Previously, we showed that the ends of broken chromosomes remain associated. Here, we have examined the machinery that holds broken chromosome ends together, and we have explored the behavior of broken chromosomes as they pass through mitosis.Results: Using GFP-localized arrays flanking an HO endonuclease site, we examined the association of broken chromosome ends in yeast cells that are checkpoint-arrested in metaphase. This association is partially dependent upon Rad50 and Rad52. After 6–8 hr, cells adapted to the checkpoint and resumed mitosis, segregating the broken chromosome. When this occurred, we found that the acentric fragments cosegregated into either the mother or daughter cell 95% of the time. Similarly, pedigree analysis showed that postmitotic repair of a broken chromosome (rejoining the centric and acentric fragments) occurred in either the mother or daughter cell, but rarely both, consistent with a model in which both acentric sister chromatid fragments are passaged into the same nucleus.Conclusions: These data suggest two related phenomena: an intrachromosomal association that holds the halves of a single broken sister chromatid together in metaphase and an interchromosomal force that tethers broken sister chromatids to each other and promotes their missegregation. Strikingly, the interchromosomal association of DNA breaks also promotes the missegregation of centromeric chromosomal fragments, albeit to a lesser extent than acentric fragments. The DNA break-induced missegregation of acentric and centric chromosome fragments provides a novel mechanism for the loss of heterozygosity that precedes tumorigenesis in mammalian cells