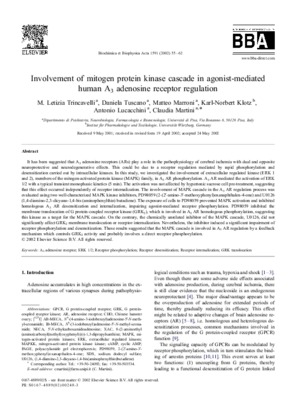 AbstractIt has been suggested that A3 adenosine receptors (ARs) play a role in the pathophysiology of cerebral ischemia with dual and opposite neuroprotective and neurodegenerative effects. This could be due to a receptor regulation mediated by rapid phosphorylation and desensitization carried out by intracellular kinases. In this study, we investigated the involvement of extracellular regulated kinase (ERK 1 and 2), members of the mitogen-activated protein kinase (MAPK) family, in A3 AR phosphorylation. A3 AR mediated the activation of ERK 1/2 with a typical transient monophasic kinetics (5 min). The activation was not affected by hypertonic sucrose cell pre-treatment, suggesting that this effect occurred independently of receptor internalization. The involvement of MAPK cascade in the A3 AR regulation process was evaluated using two well-characterized MAPK kinase inhibitors, PD98059 (2-(2′-amino-3′-methoxyphenyl)oxanaphthalen-4-one) and U0126 (1,4-diamino-2,3-dicyano-1,4-bis (aminophenylthio) butadiene). The exposure of cells to PD98059 prevented MAPK activation and inhibited homologous A3 AR desensitization and internalization, impairing agonist-mediated receptor phosphorylation. PD98059 inhibited the membrane translocation of G protein-coupled receptor kinase (GRK2), which is involved in A3 AR homologous phosphorylation, suggesting this kinase as a target for the MAPK cascade.On the contrary, the chemically unrelated inhibitor of the MAPK cascade, U0126, did not significantly affect GRK2 membrane translocation or receptor internalization. Nevertheless, the inhibitor induced a significant impairment of receptor phosphorylation and desensitization. These results suggested that the MAPK cascade is involved in A3 AR regulation by a feedback mechanism which controls GRK2 activity and probably involves a direct receptor phosphorylation