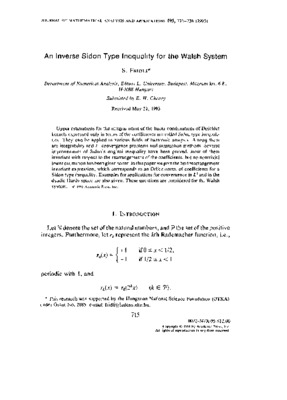 An Inverse Sidon Type Inequality for the Walsh System

AbstractUpper estimations for the integral norm of the linear combinations of Dirichlet kernels expressed only in terms of the coefficients are called Sidon type inequalities. They can be applied in various fields of harmonic analysis. Among them are integrability and L1 convergence problems and summation methods. Several improvements of Sidon′s original inequality have been proved, most of them invariant with respect to the rearrangements of the coefficients, but no nontrivial lower estimation has been given so far. In this paper we give the best rearrangement invariant expression, which corresponds to an Orlicz norm, of coefficients for a Sidon type inequality. Examples for applications for convergence in L1 and in the dyadic Hardy space are also given. These questions are considered for the Walsh system