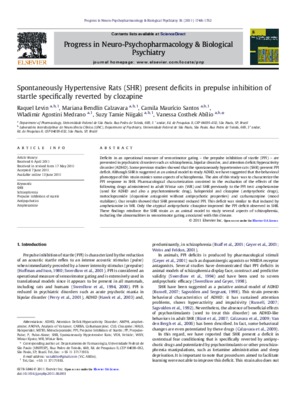 AbstractDeficits in an operational measure of sensorimotor gating – the prepulse inhibition of startle (PPI) – are presented in psychiatric disorders such as schizophrenia, bipolar disorder, and attention deficit/hyperactivity disorder (ADHD). Some previous studies showed that the spontaneously hypertensive rats (SHR) present PPI deficit. Although SHR is suggested as an animal model to study ADHD, we have suggested that the behavioral phenotype of this strain mimics some aspects of schizophrenia. The aim of this study was to characterize the PPI response in SHR. Pharmacological characterization consisted in the evaluation of the effects of the following drugs administered to adult Wistar rats (WR) and SHR previously to the PPI test: amphetamine (used for ADHD and also a psychotomimetic drug), haloperidol and clozapine (antipsychotic drugs), metoclopramide (dopamine antagonist without antipsychotic properties) and carbamazepine (mood stabilizer). Our results showed that SHR presented reduced PPI. This deficit was similar to that induced by amphetamine in WR. Only the atypical antipsychotic clozapine improved the PPI deficit observed in SHR. These findings reinforce the SHR strain as an animal model to study several aspects of schizophrenia, including the abnormalities in sensorimotor gating associated with this disease