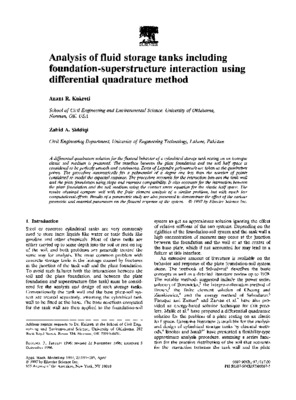 By Anant R. Kukreti and Zahid A. Siddiqi
Get PDF (1 MB)

AbstractA differential quadrature solution for the flexural behavior of a cylindrical storage tank resting on an isotropic elastic soil medium is presented. The interface between the plate foundation and the soil half space is considered to be perfectly smooth and continuous. Zeros of Legendre polynomials are taken as the quadrature points. The procedure automatically fits a polynomial of a degree one less than the number of points considered to model the expected response. The procedure accounts for the interaction between the tank wall and the plate foundation using slope and moment compatibility. It also accounts for the interaction between the plate foundation and the soil medium using the contact stress equation for the elastic half space. The results obtained compare well with the finite element analysis of a similar problem, but with much less computational efforts. Results of a parametric study are also presented to demonstrate the effect of the various geometric and material parameters on the flexural response of the system