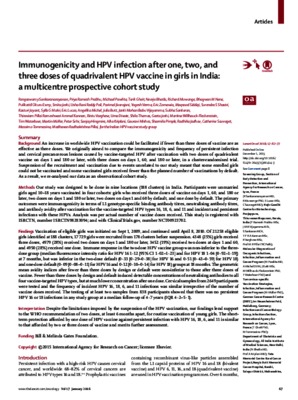 Immunogenicity and HPV infection after one, two, and three doses of quadrivalent HPV vaccine in girls in India: a multicentre prospective cohort study

SummaryBackgroundAn increase in worldwide HPV vaccination could be facilitated if fewer than three doses of vaccine are as effective as three doses. We originally aimed to compare the immunogenicity and frequency of persistent infection and cervical precancerous lesions caused by vaccine-targeted HPV after vaccination with two doses of quadrivalent vaccine on days 1 and 180 or later, with three doses on days 1, 60, and 180 or later, in a cluster-randomised trial. Suspension of the recruitment and vaccination due to events unrelated to our study meant that some enrolled girls could not be vaccinated and some vaccinated girls received fewer than the planned number of vaccinations by default. As a result, we re-analysed our data as an observational cohort study.MethodsOur study was designed to be done in nine locations (188 clusters) in India. Participants were unmarried girls aged 10–18 years vaccinated in four cohorts: girls who received three doses of vaccine on days 1, 60, and 180 or later, two doses on days 1 and 180 or later, two doses on days 1 and 60 by default, and one dose by default. The primary outcomes were immunogenicity in terms of L1 genotype-specific binding antibody titres, neutralising antibody titres, and antibody avidity after vaccination for the vaccine-targeted HPV types 16, 18, 6, and 11 and incident and persistent infections with these HPVs. Analysis was per actual number of vaccine doses received. This study is registered with ISRCTN, number ISRCTN98283094; and with ClinicalTrials.gov, number NCT00923702.FindingsVaccination of eligible girls was initiated on Sept 1, 2009, and continued until April 8, 2010. Of 21 258 eligible girls identified at 188 clusters, 17 729 girls were recruited from 178 clusters before suspension. 4348 (25%) girls received three doses, 4979 (28%) received two doses on days 1 and 180 or later, 3452 (19%) received two doses at days 1 and 60, and 4950 (28%) received one dose. Immune response in the two-dose HPV vaccine group was non-inferior to the three-dose group (median fluorescence intensity ratio for HPV 16 1·12 [95% CI 1·02–1·23] and for HPV 18 1·04 [0·92–1·19]) at 7 months, but was inferior in the two-dose default (0·33 [0·29–0·38] for HPV 16 and 0·51 [0·43–0·59] for HPV 18) and one-dose default (0·09 [0·08–0·11] for HPV 16 and 0·12 [0·10–0·14] for HPV 18) groups at 18 months. The geometric mean avidity indices after fewer than three doses by design or default were non-inferior to those after three doses of vaccine. Fewer than three doses by design and default induced detectable concentrations of neutralising antibodies to all four vaccine-targeted HPV types, but at much lower concentration after one dose. Cervical samples from 2649 participants were tested and the frequency of incident HPV 16, 18, 6, and 11 infections was similar irrespective of the number of vaccine doses received. The testing of at least two samples from 838 participants showed that there was no persistent HPV 16 or 18 infections in any study group at a median follow-up of 4·7 years (IQR 4·2–5·1).InterpretationDespite the limitations imposed by the suspension of the HPV vaccination, our findings lend support to the WHO recommendation of two doses, at least 6 months apart, for routine vaccination of young girls. The short-term protection afforded by one dose of HPV vaccine against persistent infection with HPV 16, 18, 6, and 11 is similar to that afforded by two or three doses of vaccine and merits further assessment.FundingBill & Melinda Gates Foundation