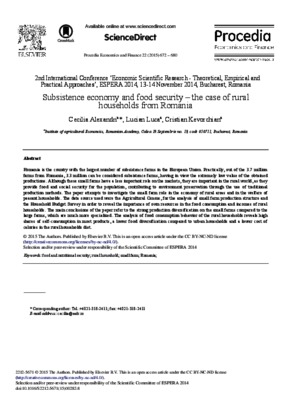 AbstractRomania is the country with the largest number of subsistence farms in the European Union. Practically, out of the 3.7 million farms from Romania, 3.3 million can be considered subsistence farms, having in view the extremely low value of the obtained productions. Although these small farms have a less important role on the markets, they are important in the rural world, as they provide food and social security for the population, contributing to environment preservation through the use of traditional production methods. The paper attempts to investigate the small farm role in the economy of rural areas and in the welfare of peasant households. The data source used were the Agricultural Census, for the analysis of small farm production structure and the Household Budget Survey in order to reveal the importance of own resources in the food consumption and incomes of rural households. The main conclusions of the paper refer to the strong production diversification on the small farms compared to the large farms, which are much more specialized. The analysis of food consumption behavior of the rural households reveals high shares of self-consumption in most products, a lower food diversification compared to urban households and a lower cost of calories in the rural households diet