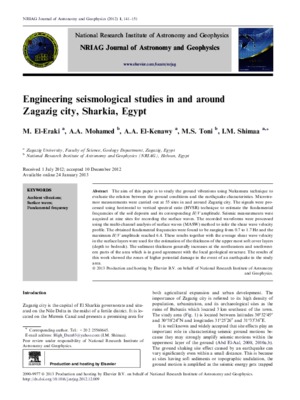 Engineering seismological studies in and around Zagazig city, Sharkia, Egypt

AbstractThe aim of this paper is to study the ground vibrations using Nakamura technique to evaluate the relation between the ground conditions and the earthquake characteristics. Microtremor measurements were carried out at 55 sites in and around Zagazig city. The signals were processed using horizontal to vertical spectral ratio (HVSR) technique to estimate the fundamental frequencies of the soil deposits and its corresponding H/V amplitude. Seismic measurements were acquired at nine sites for recording the surface waves. The recorded waveforms were processed using the multi-channel analysis of surface waves (MASW) method to infer the shear wave velocity profile. The obtained fundamental frequencies were found to be ranging from 0.7 to 1.7Hz and the maximum H/V amplitude reached 6.4. These results together with the average shear wave velocity in the surface layers were used for the estimation of the thickness of the upper most soft cover layers (depth to bedrock). The sediment thickness generally increases at the northeastern and southwestern parts of the area which is in good agreement with the local geological structure. The results of this work showed the zones of higher potential damage in the event of an earthquake in the study area