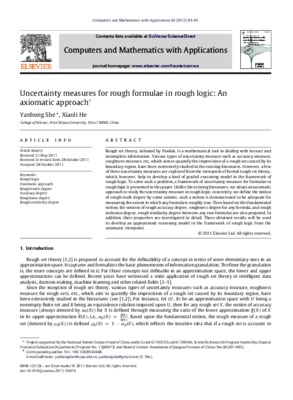 AbstractRough set theory, initiated by Pawlak, is a mathematical tool in dealing with inexact and incomplete information. Various types of uncertainty measure such as accuracy measure, roughness measure, etc, which aim to quantify the imprecision of a rough set caused by its boundary region, have been extensively studied in the existing literatures. However, a few of these uncertainty measures are explored from the viewpoint of formal rough set theory, which, however, help to develop a kind of graded reasoning model in the framework of rough logic. To solve such a problem, a framework of uncertainty measure for formulae in rough logic is presented in this paper. Unlike the existing literatures, we adopt an axiomatic approach to study the uncertainty measure in rough logic, concretely, we define the notion of rough truth degree by some axioms, such a notion is demonstrated to be adequate for measuring the extent to which any formula is roughly true. Then based on this fundamental notion, the notions of rough accuracy degree, roughness degree for any formula, and rough inclusion degree, rough similarity degree between any two formulae are also proposed. In addition, their properties are investigated in detail. These obtained results will be used to develop an approximate reasoning model in the framework of rough logic from the axiomatic viewpoint