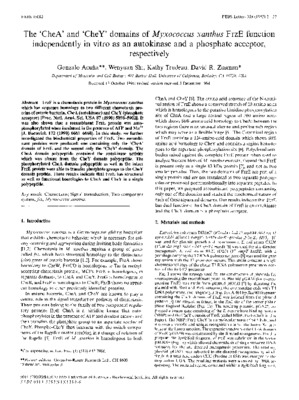 The ‘CheA’ and ‘CheY’ domains of Myxococcus xanthus FrzE function independently in vitro as an autokinase and a phosphate acceptor, respectively

AbstractFrzE is a chemotaxis protein in Myxococcus xanthus which has sequence homology to two different chemotaxis proteins of enteric bacteria, CheA (autokinase) and CheY (phosphate acceptor) [Proc. Natl. Acad. Sci. USA 87 (1990) 5898–5902]. It was also shown that a recombinant FrzE protein was autophosphorylated when incubated in the presence of ATP and Mn2+ [J. Bacteriol. 172 (1990) 6661–6668]. In this study, we further investigated the biochemical properties of FrzE. Two recombinant proteins were produced: one containing only the ‘CheA’ domain of FrzE and the second only the ‘CheY’ domain. The CheA domain polypeptide contained the autokinase activity which was absent from the CheY domain polypeptide. The phosphorylated CheA domain polypeptide as well as the intact FrzE protein were able to transfer phosphate groups to the CheY domain peptide. These results indicate that FrzE has structural as well as functional homologies to CheA and CheY in a single polypeptide